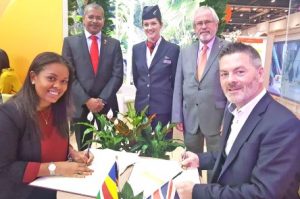 London (United Kingdom) – November 14, 2017 (travelindex.com) – The Seychelles Tourism Board (STB) has signed an agreement with British Airways, which is preparing to launch direct flights to Seychelles in March next year. The two-year agreement establishes the framework to market and promote Seychelles as a destination and support British Airways’ non-stop, twice-weekly flights to the destination. The signing took place on Monday November 6, 2017, on the sideline of the World Travel Market (WTM) in London.

The marketing agreement was inked by the Chief Executive of the Seychelles Tourism Board, Sherin Francis and British Airways’ Head of Agency and Consumer Sales, Chris Rankin. This was done at the Seychelles’ stand at WTM, in the presence of the Minister for Tourism, Civil Aviation, Ports and Marine, Ambassador Maurice Loustau-Lalanne, and High Commissioner to the United Kingdom, Derick Ally.

Through this collaboration, STB and British Airways will undertake joint marketing initiatives aimed at promoting Seychelles and the British Airways flights to the destination; and this will be done through various means, including, but not limited to social media, promotional activities including FAM trips, among others.

British Airways will be resuming flights to Seychelles on March 24, 2018, after over a decade of not flying to the Indian Ocean island destination. It will operate non-stop, twice-weekly flights from its main hub, London Heathrow, using its newest fleet of aircraft, the Boeing 787-9 Dreamliner. The flights will depart London Heathrow airport on Wednesdays and Saturdays, returning on Thursdays and Sundays.

STB’s Chief Executive, Mrs Sherin Francis said: “The British Airways’ return on the destination will be a big boost for our already buoyant UK and Ireland market and given it will fly out of London Heathrow it will provide further boost to our US market and other European markets. Joining BA’s already strong marketing team will definitely help strengthen our presence on these markets.”

Europe has long been and remains the Seychelles’ main tourism market. When it comes to UK, statistics show that the market has sent 19,330 visitors to Seychelles up to November 5 this year, representing a 19 percent growth when compared to the same period in 2016. The UK is currently the country’s fifth leading tourism market.