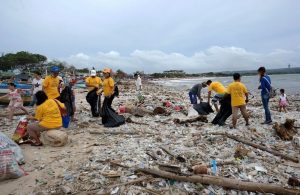 Jakarta (Indonesia)- March 11,2019    (travelindex.com) –  The Government of Indonesia, in partnership with the Global Plastic Action Partnership (GPAP), today announced new measures in the country’s ambitious national plan to reduce marine plastic debris by 70%, reduce solid waste by 30%, and to handle 70% of solid waste by 2025.

The Coordinating Ministry of Maritime Affairs and the Ministry of Environment and Forestry will work with local businesses and stakeholders and global partners to evaluate viable solutions for plastic pollution, develop an investment and action plan to reduce it, prioritize investment opportunities and advance a roadmap for implementation. Hosted by the World Economic Forum, GPAP aims to redesign the global “take-make-dispose” economy as a circular one. The partnership has been designed so that Indonesia’s approach to addressing plastic pollution can act as an example to be adapted and implemented in other countries.
Indonesia’s Coordinating Minister for Maritime Affairs, Luhut B. Pandjaitan, whose ministry has been at the forefront of the region’s battle with plastic waste, said that if the plan is achieved, his children and grandchildren will be able to enjoy pristine waters around Indonesia that are rich in biodiversity and free of plastic pollution.

We want to see the next generation in Indonesia having a much better quality of life and health than our generation today,” he said. “Through collaboration and strong teamwork with the World Economic Forum, we can mobilize public, private and community support to safeguard the richness of our marine biodiversity for our children and grandchildren.”

GPAP is working with stakeholders across the plastics ecosystem to co-develop a roadmap of actionable solutions. Successful implementation will depend on the quality of underlying data and analysis.

To support this, Pew Charitable Trusts and SYSTEMIC will develop an analytical model for data-driven decision making. A team in Jakarta is collecting local waste management data and building a model that evaluates solutions that can contribute to the 70% reduction target. These solutions include:

For each solution, the model will estimate the investment needed, timeline, environmental footprint, and greenhouse gas emissions, as well as the impact on people’s lives.

In Indonesia, the work of the partnership will be chaired by Minister Luhut. The partnership engages with business, civil society and government organisations from a range of sectors, including: Chandra Asri Petrochemical, Coca-Cola Amatil, the Coordinating Ministry of Maritime Affairs, Dow, the Ellen MacArthur Foundation, Evoware, Giti Group, the Indonesian Business Council for Sustainable Development (IBCSD), Indorama Synthetics, the Ministry of Environment and Forestry, Indofood CBP Sukses Makmur, PepsiCo, Nestlé, The World Bank, and WWF Indonesia.

“Communities, entrepreneurs and government agencies across Indonesia are stepping up in the battle against plastic pollution,” said Dominic Waughray, Head of the Centre for Global Public Goods, Member of the Managing Board, World Economic Forum. “The uniqueness of the Global Plastic Action Partnership is to show to the world that through fast, concerted, science-based multistakeholder action, we can fix these seemingly intractable problems and preserve our natural heritage for future generations.”

Kristin Hughes, newly appointed Director of the Global Plastic Action Partnership said, “I am thrilled to be joining this important initiative. Thanks to the leadership of Indonesia’s government and the innovative approach of local industry, other countries will be able to learn from their experiences to turn commitments into actions.”

The effort is the first national partnership of GPAP, a public-private partnership launched last year to translate political and corporate commitment to address plastic pollution into tangible strategies and investible actions plans. These include, for example, the efforts of the Commonwealth Clean Oceans Alliance, the Ocean Plastics Charter as well as the New Plastics Economy Global Commitment from the  Ellen MacArthur Foundation.

GPAP is hosted by the World Economic Forum with support from the governments of Canada and the United Kingdom as well as global companies including The Coca-Cola Company, Dow, PepsiCo and Nestlé. It is an initiative of the Platform for Accelerating the Circular Economy (PACE) and The Friends of Ocean Action.