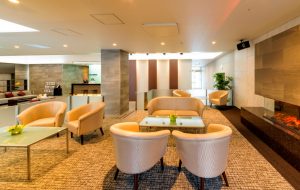 Best Western Plus Hotel Fino Chitose, which is situated just 3.2 km from the airport terminal, welcomed its first guests on June 1, 2018. This brand new hotel offers guests a convenient base from which to explore Hokkaido’s top business and tourism destinations, including the vibrant city of Sapporo and the upmarket ski resort of Niseko.

It also becomes one of the closest internationally-branded hotels to New Chitose, Japan’s fifth busiest airport. This major air gateway, which handles more than 20 million passengers per year, now offers direct connections to and from major cities all across Asia and beyond, including Hong Kong, Singapore, Bangkok, Shanghai and Kuala Lumpur.

“We are delighted to welcome guests to Best Western Plus Hotel Fino Chitose, as we continue to expand our Japanese portfolio and provide world-class accommodation to guests across the country,” said Olivier Berrivin, Best Western’s Managing Director of International Operations – Asia. “With its dramatic landscapes, stunning scenery and fresh mountain air, Hokkaido is a fantastic destination for travelers seeking a break from the city.”

“Perfectly positioned on the doorstep of New Chitose Airport, this brand new hotel is suited to business and leisure travelers, including families. It will be ideal for guests who want to break up their journey to and from Hokkaido, or those seeking a convenient base for their activities on the island. I am confident that Best Western Plus Hotel Fino Chitose will prove extremely popular with all our guests,” Olivier added.

Hokkaido hosts a year-round calendar of events, including the famous Sapporo Snow Festival which attracts more than two million people each year. The nearby Niseko area is quickly developing a global reputation for its world-class winter sports, hot spring resorts, golf courses and other outdoor activities.

This expansion comes as Japan prepares to host a series of major international sporting events, including the 2020 Olympic Games and the 2019 Rugby World Cup, which will include matches staged in Sapporo.

In total, Best Western now operates a nationwide portfolio of 16 hotels all across Japan, from Hokkaido in the North to Okinawa in the South, making it one of the country’s largest international hotel operators.

About Best Western Hotels & Resorts:
Best Western Hotels & Resorts headquartered in Phoenix, Arizona, is a privately held hotel brand with a global network of 4,200* hotels in more than 100* countries and territories worldwide. Best Western offers 11 hotel brands to suit the needs of developers and guests in every market: Best Western®, Best Western Plus®, Best Western Premier®, Vīb®, GLō®, Executive Residency by Best Western®, BW Premier Collection®, and BW Signature CollectionSM by Best Western; as well as its recently launched franchise offerings: SureStay® Hotel by Best Western, SureStay Plus® Hotel by Best Western and SureStay CollectionSM by Best Western. Now celebrating more than 70 years of hospitality, Best Western provides its hoteliers with global operational, sales and marketing support, and award-winning online and mobile booking capabilities. Best Western continues to set industry records regarding awards and accolades, including 64 percent of the brand’s North American hotels earning a TripAdvisor® Certificate of Excellence award in 2017, Business Travel News® ranking Best Western Plus and Best Western number one in upper-mid-price and mid-price hotel brands, and Best Western receiving seven consecutive Dynatrace® Best of the Web awards for its leading hotel website. Best Western has also won nine consecutive AAA®/CAA® Lodging Partner of the Year awards, recognizing the brand’s commitment to providing exceptional service and great value to AAA/CAA’s nearly 58 million members in the U.S. and Canada. Best Western-branded hotels were top ranked in J.D. Power’s 2017 North America Hotel Guest Satisfaction Index Study – ranking first in breakfast (food and beverage category) for midscale; and second in overall guest satisfaction. Over 32 million travelers are members of the brand’s award-winning loyalty program Best Western Rewards®, one of the few programs in which members earn points that never expire and can be redeemed at any Best Western hotel worldwide. Best Western’s partnerships with AAA/CAA and Harley-Davidson® provide travelers with exciting ways to interact with the brand. Through its partnership with Google® Street View, Best Western is the first major company of its size and scale to launch a virtual reality experience for customers, setting a new industry standard and reinventing how guests view hotels.
– All Best Western and SureStay-branded hotels are independently owned and operated.
– Numbers are approximate, may fluctuate, and include hotels currently in the development pipeline.