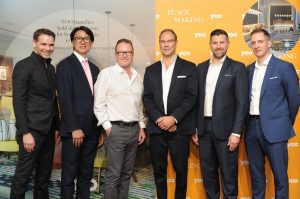 Bangkok (Thailand) – February 20, 2019 (travelindex.com) – With a hive-mind of design talent and visionary concepts the “out-of-the-box” design brand readies to reinvent spaces throughout the region. What do you get when you cross a game-changing property developer with one of the most seminal names in design and a gang of visionary architects, curators, celebrity style icons and interior design sages? YOO already know the answer.

Now the brand, which is just as well known for its show-stopping ensemble as it is its enviably unique property developments and interior designs, is setting up shop in Southeast Asia.

YOO Worldwide recently announced that Bangkok will be the base for its regional HQ and has already confirmed the appointment of key executives – supported by a stable of creative directors – to propel its residential design and hotel franchise business forward.

Central to YOO’s approach is a bold vision to rethink and reimagine spaces through the concept of “Placemaking”, which considers the entire environment, space and community rather than just the box in a residence or hotel. This is also the first time the YOO brand will be available for design of private commissions, houses, bars, restaurants, show apartments, social enterprises and co-working spaces.

The UK-based company was created at the turn of the 21stcentury by radical real estate developer John Hitchcox and international design legend Philippe Starck with a mission to enrich lives through extraordinary living spaces. Focusing on places and spaces, YOO is now the largest pure residential design brand in the world, with 81 projects in 40 countries.

The team is now turning its attentions to Southeast Asia, tapping into, amongst other trends, the soaring demand for high-end branded residences. With more than 25 percent of the world’s “under-construction” real developments based in Asia Pacific, it’s been a question of ‘when’, not ‘if’, YOO would expand eastward.

“We see huge opportunities for growth in Asia. We really feel the market is ready for our unique brand of design. We challenge, innovate, disrupt and bend rules – allowing our clients’ projects to stand out, adding greater visibility and value to their developments. We’re about ‘the space’ – inside and out – and this is what drives YOO’s design,” explains James Snelgar, Partner & Head of Business Development, YOO Worldwide.

YOO’s regional headquarters are in Bangkok where its Asia-partner for hotel operations ONYX Hospitality Group is based. In late 2017, YOO and ONYX launched a duo of distinctive hotel brands, YOO Collection and Yoo2, with the first Yoo2 hotel due to launch in Phuket in 2020.

Khun by Yoo, inspired by Philippe Starck, developed by Sansiri will also transfer later this year – and currently sets the highest per square metre price on Thonglor. Other notable Asia projects include 8 Conlay in Kuala Lumpur and a number of multi award-winning residential and hospitality projects in Hong Kong including Mira Moon.

“We are not entirely new to the region, but we are looking to shake things up a bit and grow through our new presence in the region,” says Snelgar. “Our designers will work with leading development companies to bring their visions to life and we will nurture creative talent in Bangkok to build a new team of designers based here,” he added.

Branded residences are among the hospitality industry’s fastest-growing sectors, and YOO is at its forefront with 13 percent of the world’s total portfolio. Fun, rebellious and innovative, YOO is disrupting traditional hotel and residence brands and attracting Asia’s emerging generation of high-net-worth millennial buyers to its designed “spaces”.

“We don’t believe in residences or hotel rooms,” adds Snelgar. “We believe in spaces.”

About YOO
A truly international company, YOO now operates in 34 countries, 57 cities, with over 80 projects within its portfolio. Through the directional partnering with design icons such as Philippe Starck, Marcel Wanders, Jade Jagger, Steve Leung, Sussanne Khan and its own designers through YOO Studio, YOO partners with developers to add value, velocity and visibility to their developments. Through such services as interior design, architecture, development, investment, marketing and branding, YOO creates extraordinary and inspiring living spaces, which are unrivalled in the property industry.

YOO recently launched YOO Hotels and Resorts: a full-circle design, branding and operations offering for developers, in two ground-breaking visions: the unabated luxury of YOO Collection, and the affordable luxury of YOO2. YOO Hotels creates design-led experiences where objectives are based on meeting the desires for convenience, customised service and personal satisfaction to create unique hotel experiences.