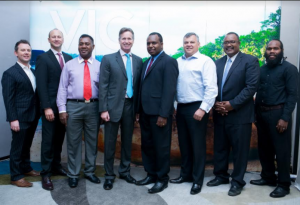 Bangkok (Thailand) – October 12, 2017 (travelindex.com) – The Republic of Vanuatu this month is sending a Government delegation to Bangkok to conduct a series of briefings covering Trade, Tourism and Citizenship by Investment in this South Pacific island nation. A former British and French Colony, Vanuatu (previously The New Hebrides) gained independence in 1980 and remains a member of the British Commonwealth. Stretching a distance of some 1,300km in a north to south string of 83 islands (65 populated), Vanuatu’s population of 285,000 enjoys the accolade of being a top five “happiest places on earth” according to the 2016 “Happy Planet Index”. Relatively unspoiled by mass tourism, Vanuatu possesses a wide range of attractions from scuba diving in crystal-clear waters, to ash-surfing on the slopes of an active volcano. A safe, peaceful country, Vanuatu has no formal Armed Forces and relies for its security on neighboring Australia.

The Vanuatu Delegation, appointed for this mission by Vanuatu’s Prime Minister Charlot Salwai will visit Thailand during the 25th-29th September. A focal point of the visit is to support the launch of the global network of Government approved offices under the “Vanuatu Information Centre” (VIC) brand.

VIC headquarters is in Port Vila, Vanuatu, however Bangkok has been selected as the centre for VIC’s global operations, given its location, and convenience as an international air-travel hub. From Bangkok, Vanuatu’s Capital Port Vila is easily reachable via Brisbane, Sydney or Auckland, but plans are being made to operate direct flights from Bangkok to Vanuatu, in order to develop trade and tourism links in the Asia Pacific area.

A key service of the VIC network is to act as a marketing channel for Vanuatu’s “Citizenship by Investment” Program (CIP). The Program offers individuals the opportunity to obtain an Honorary Second Citizenship in a Tax Free, British Commonwealth member state, in exchange for a contribution to Vanuatu Government Development Funds.

Termed the Vanuatu “Development Support Program” (DSP), this Citizenship Program is a vital source of development funds for the Country. Vanuatu passport-holders enjoy significant benefits – such as visa-free travel to 125 countries – including the UK, Schengen Europe and Russia – with more countries added each year.

So-called “CIPs” are widespread in the Caribbean Nations and have exploded in popularity in the past ten years, however, Vanuatu’s DSP is unique as the first, and only CIP of its type in the Asia Pacific Hemisphere – with a clear geographical advantage for the APAC market.

CIPs are rapidly gaining in popularity – particularly amongst High Net-Worth Individuals (HNWI) seeking the advantages offered by having a second passport, both for ease of international travel and personal security – as well as Citizenship in a safe, “tax haven” environment. Thailand has not traditionally been a market leader in terms of individuals seeking second citizenship, but Thai Nationals and Foreign Residents alike are increasingly turning to CIPs as a highly valuable element of their personal asset portfolio.

Commenting on the forthcoming delegation visit, Chairman of the VIC and Hon Consul for Vanuatu to Vietnam, (Lord) Geoffrey Bond said, “The Development Support Program offers a global freedom of travel, but equally importantly, it provides a passport to a true paradise that offers incredible opportunities for tourism, living and investment. We invited this delegation in order to provide an opportunity for interested parties to meet and speak directly with Vanuatu Government representatives, to understand better the exceptional opportunities that the DSP and Vanuatu itself offers”.

In addition to promoting trade and tourism, the Vanuatu delegation will be seeking to open discussions about potential visa-free access for Vanuatu passport-holders to Thailand, as Thai Nationals already enjoy 30-day visa-free access to Vanuatu. Such a move would significantly enhance the attractiveness of Thailand as both a transit point for travelers to and from Vanuatu, but also promote faster development of trade and tourism between the two countries.

The delegation is led by Hon Andrew Solomon Napuat MP, Parliamentary Secretary to the Ministry of Internal Affairs, with a portfolio of Passport & Immigration Services. Hon Andrew Napuat explained, “I am delighted to be making this first visit to the Kingdom of Thailand. On behalf of our Prime Minister, Hon Charlot Salwai, I will be leading a group of Government representatives, each of whom offers a relevant specialism, to enable full briefings covering all aspects of trade and tourism opportunities, plus Vanuatu’s newly launched second citizenship program, the Development Support Program. I look forward greatly to enhancing our relationship with Thailand for our mutual benefit.

Central to the visit will be an event at which the delegation will hand across the official letter of appointment of Harvey Law Group (www.harveylawcorporation.com) as the first global representative of the Vanuatu Development Support Program.

Mr James Harris, Managing Director of the VIC network remarked “the official appointment of Harvey Law Group as a global representative means a significant elevation in the profile of the Development Support Program, in line with our ambition to secure a position as one of the world’s leading Citizenship by Investment Programs. Harvey Law Group, with their particular strength and depth in the Asia Pacific perfectly reflect our own current regional footprint. We look forward greatly to supporting Harvey Law Group in this new initiative”.

With five offices already up and running in Asia and a rapidly evolving network of agents, VIC is targeting to be in China and the UK within the next six months, and to expand into additional geographies during 2018.