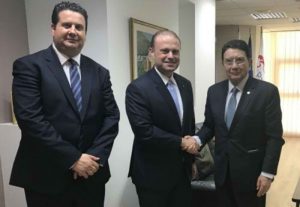 UNWTO Secretary-General Taleb Rifai congratulated Malta on its good tourism results and thanked the Prime Minister for placing tourism high in the agenda of the European Union during its current presidency. “Malta is playing a critical role in ensuring that tourism is recognized for the value it has for the economy and employment in the EU,” said Mr Rifai.

The Prime Minister expressed his full support to the sector as a key economic activity for Malta, one of the main drivers of economic growth, creation of quality jobs and overall improvement of Malta’s social fabrics. He said that the Maltese Government has for the last years adopted a new tourism strategy and that a firm commitment to sustainable development is currently high on the agenda. Dr. Muscat reaffirmed that tourism is much more than climate, cultural activities and historical sites, more even than new niches such as diving tourism, conferences and events, wedding tourism, cruise and luxury accommodation. “It is actually one of those areas through which we believe that wealth percolates to all sections of society in a direct manner,” said the Prime Minister.

David Scowsill, President and CEO of the World Travel & Tourism Council, said: “Travel and tourism contributed 2,425.5 million euros (2,706.1 million USD) to Malta’s GDP, which is 26.7% of the country’s total GDP, and supported 27.8% of total employment in the country. Our sector is a stimulator of economic growth and a creator of jobs. We commend the Maltese government for its commitment to travel and tourism, and its continuous efforts to drive growth while preserving the assets the beautiful island has to offer.”

Rifai also met the President of Malta, Marie-Louise Coleiro Preca, who during the meeting reiterated her belief that the tourism sector has the ability to build peace to create prosperity.

Both meetings were held coinciding with a UNWTO Masterclass on ‘Attracting Chinese Tourism to the Mediterranean Countries’ and an event on ‘Enhancing Europe’s Tourism Competitiveness through New Products’ organized in the framework of the Maltese Presidency of the EU.

On the occasion, UNWTO welcomed six Maltese companies to sign the Private Sector Commitment to the Global Code of Ethics for Tourism: Air Malta, Federation of Associations of Travel and Tourism Agents (FATTA); Gozo Tourism Association; Malta Hotels and Restaurants Associations (MHRA); Malta Chamber of Commerce, Enterprise and Industry; and Valletta Cruise Port. By adhering to the Code, signatories commit to implementing and promoting its principles in their business strategies and operations. To date, 514 companies and associations from 68 countries have joined this Commitment.