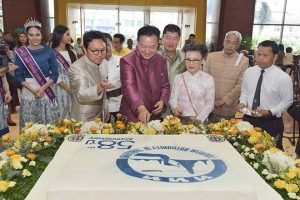 Bangkok (Thailand) – March 21, 2018 (travelindex.com) – The Tourism Authority of Thailand (TAT) proudly marked the 58th anniversary of its founding with traditional Thai ceremonies to commemorate its historic role in the development and promotion of the kingdom’s leading service-sector industry.

The 19 March event at the TAT headquarters, led by Mr. Kalin Sarasin, Chairman of the Board of the TAT, and Mr. Yuthasak Supasorn, TAT Governor, as well as TAT’s senior executives, was attended by former TAT Governors, TAT staff, representatives from the private sector and members of the media.

The ceremonies to mark the auspicious occasion included a Buddhist monk blessing ceremony; a ritual to worship the Cham Devi Shrine, which houses a statue of Chao Mae Cham Devi; and a ceremony to pay respect to the bronze image of Field Marshall Sarit Thanarat, who established the TAT in 1960.

Taking place in the afternoon was a ceremony to present Buddha image to former TAT Governors for blessing and in recognition for their valued contributions. Meanwhile, TAT also held a ceremony to award senior staff for their long-serving years.