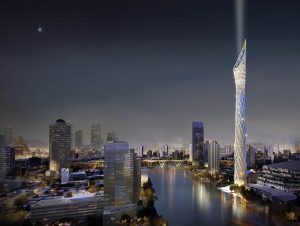 Bangkok (Thailand) – September 17, 2017 (travelindex.com) – Thailand’s capital is to get its first city observation. A 459-metre-high tower will rank 6th among the world’s tallest towers as well as be the tallest observation tower in Southeast Asia.

The tower is being jointly built by two foundations, the Bangkok Observation Tower Foundation and the National Identity Foundation, after the Thai cabinet recently gave approval for the country’s new landmark project to proceed. The cost of construction, totaling approximately US$ 138 million is being funded by more than 50 private sector organisations who are contributing to the project.

Located on the banks of the Chao Phraya River, the Bangkok Observation Tower is set on a 6,400 square metre land plot owned by Thailand’s Treasury Department and leased to the Bangkok Observation Tower Foundation for 30 years. The Foundation is required to deliver ownership of the tower and all other structures on the land to the Treasury Department when the construction is completed in 2019.

The tower has been enthusiastically embraced by Thailand’s tourism sector as a much-needed addition to the nation’s tourist-pulling attractions and as a catalyst to investment and employment in the sector.

Mr. Ittirith Kinglake, President, Tourism Council of Thailand, said, “The tower is the most important new addition to Bangkok’s rich array of tourism magnets and one that will attract people from around the world. The Bangkok Observation Tower helps mark our city as one of the world’s most important and exciting destinations.” He cited parallels with the Tokyo Skytree and Shanghai’s Canton Tower as powerful tourism drivers for their host city.

“There were 32.6 million visitors to Thailand in 2016 who, together, spent almost 72 billion dollars. In 2020, the number of visitors to Thailand is expected to increase to be 41.5 million visitors. Tourism has consistently been one of our country’s most important revenue sources and accounts for 17.7% of GDP. The coming of the tower will act as significant tourism drivers for the country.” Mr. Ittirith said.

He added that tourism is also one of the biggest employers of the country and creates employment for around 4.2 million people.

Cdr. Parinya Ruckwatin Rtn., Chairman of the Chao Phraya River Tourism Association, said, “The Bangkok Observation Tower’s riverside location will reignite interest in the river and accelerate efforts to make the river a clean, safe and natural corridor that is lined with historical and culturally significant landmarks, from every era, and which act as enduring testaments to the endeavours of our nation.”

“I am confident that with the arrival of the tower, businesses stretching for 10 kilometers along the length of the river will benefit, including boat operators, restaurants, hotels, retailers and convention organizers. We can also expect improvements of more than 10 piers along the river to make them safer and easier to use. It’s a true historic turning point for this part of the river. Chao Phraya River will become one of the world’s exciting new destinations, offering a diverse range of experiences that will meet a great variety of needs of visitors.” he added.

Local residents in the vicinity of the tower have been very welcoming of the initiative, believing it will lift interest in their communities, creating new employment and boosting their livelihoods.

Mrs. ‘Granny’ Tim Somsong Somsuk , said, “Our Suvarnabhumi Mosque community located on the Thonburi side of the river had always been a place of historic importance and then it slipped into obscurity and neglect. The Bangkok Observation Tower will help regenerate our community and re-establish its prestige as a place of historic significance.”

This location in Klongsarn District is reputedly the historic site on which a flag would be flown, several centuries ago, as a symbolic marker to foreign vessels navigating the river to tell them that they were in Siamese territory.

She added that the building of the private sector sponsored “Golden Line” mass transit rail line that runs in front of the community and the observation tower was also a factor that would enhance the community’s fortunes.

An unprecedented array of Thailand’s foremost architectural and engineering firms as well as architectural experts came together to design the tower in a show of national solidarity.

Inspiration for the candle-like design of the Bangkok Observation Tower is drawn from the popular celebratory tradition, observed by millions around the country, of lighting candles on the birthday of the late King Bhumibol Adulyadej as a symbolic gesture of lighting up the country with prosperity.

The Bangkok Observation Tower Foundation is a not-for-profit organization that has the right to operate and manage the tower for 30 years. There is no commercial space for rent inside the tower. The space inside the tower will be used for educational purpose promoting Thailand’s historical and cultural heritage as well as various aspects of particular pride from Thailand’s 77 provinces. The surplus from income generated from ticket sells and other sources will be used for social causes that benefit the local community or for charities only.