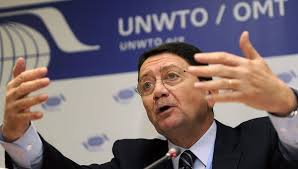 Brussels (Belgium) – December 12, 2016 (travelindex.com) – In an official visit to Brussels, Belgium on 7 December, Secretary-General of the World Tourism Organization (UNWTO) Taleb Rifai emphasized the role that municipalities and regions play in the development of sustainable and competitive tourism in Europe.

Rifai was a special guest at the 120th Plenary Session of the Committee of the Regions of the European Union, where he addressed its 350 members on the occasion of the debate and adoption of the opinion on ‘Tourism as a driving force for regional cooperation across the EU’. Meeting the rapporteur of the opinion, Hans-Peter Wagner, Mayor of Breitenwang (Austria), Rifai stressed the relevance of tourism at regional level in terms of socio-economic and cultural development, and the need to enhance regional cooperation.

“European cities, regions and municipalities are key pillars to foster sustainable and competitive tourism. This is the moment to lay the foundations for a new paradigm for the tourism sector; to embrace a sustainable, inclusive and responsible tourism sector that makes clear business sense, drives local development and builds a sense of common future in Europe,” said Rifai in his intervention.

As part of his visit, the Secretary-General met a number of Members of the European Parliament. The bilateral discussions focused on how to further strengthen the ongoing cooperation between the two entities in light of the forthcoming International Year of Sustainable Tourism for Development in 2017 and European Year of Cultural Heritage in 2018.

In a meeting between Rifai and Claudia Tapardel, Co-Chair of the Intergroup on European Tourism Development, it was agreed that two major UNWTO/European Parliament events will be held in 2017, one of which in Romania on the digitalisation of the tourism sector and seasonality.

“This will be an ideal opportunity to discuss the concrete challenges of Romanian tourism, starting with the economic impact of seasonality and ending with professional training of employees in the field,” said Tapardel.

“Romania has been advancing strongly in tourism development and I would encourage the incoming government to consider the creation of a dedicated tourism ministry to make the best use of Romania’s opportunities in the sector. Romania would greatly benefit from a coordinated and centralized approach to tourism that further stresses the links between the sector and SMEs,” Rifai added.

“UNWTO is very happy to support such an innovative initiative as it can help promote the richness of the tourism offer of European regions and cities while increasing citizens’ pride in sharing local tourism-related values,” said Rifai in a debate conducted with stakeholders of the European Tourism Manifesto and private sector representatives.

UNWTO Secretary-General also met Committee member Claudia Monteiro de Aguilar, who expressed her appreciation for the continuous support of UNWTO to the tourism sector in Portugal.