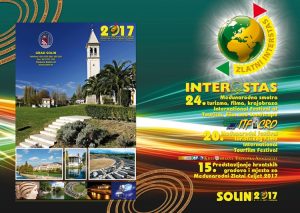 All three events are members and partners world of the world associations, travel, tourism film, travel journalism, landscape, ecology and sustainable development; F.I.J.E.T., F.E.S.T., I.T.C.O., CiB. With the support of the world associations and main host Hotel President Solin, all three events will be held by the support of the City of Solin and high patronage of the President of Republic of Croatia, Mrs Kolinda Grabar – Kitarović.

The event will begin on Wednesday November 8th. At 18 o’clock with special exhibitonn, at 19 o’clock with flag-rising ceremony, followed by retrospective of the awarded films in honor of the 20th anniversary of the International Tourism Film Festival – ITF’CRO. On Thursday, November 9th from 10 o’clock; continuing the working part of all three events, protocolar and working representation of Exhibitors/Laureate – winners of international tourism awards and recognitions; KEA-CRO, CHART FEST and GOLDEN INTERSTAS ‘2017. Closing ceremony of the event is on Friday, November 10th from 19 o’clock, with the award winning ceremony for the Certificate to Croatian competitors for INTERNATIONAL GOLDEN FLOWER – CiB, award winning ceremony for the international tourism awards: CHART FEST ‘2017 and GOLDEN INTERSTAS ‘2017, but also for film festival awards such as festival diplomas, festival special awards and 20th ITF’CRO Grand Prix.

24th INTERSTAS is a place for meeting and presentation of the Laureates – respected individuals and organizations from Croatian and world winners of prestigious international tourism awards (it could be individual od collective award). The prizes will be awarded: „For excellence in the field of tourism, contributing to the development of tourism trough culture, ecology, sports and also contributing to improve the quality of life, sustainable developmet and protection of the environment.“

The last year, 2016, with the explanation of the Commission of Tourism Journalists, from 25 countries of the world, we received 124 applications. We accepted 93 applications for individual and collective candidates and then nominated 69 of them. By the decision of the Central Committee of the F.E.S.T. and the Directory of the event there have been 30 selected laureates. From which there have been 1 Certificate, 20 individuals awarded and 9 collective prizes.

20th jubilee ITF’CRO/ International Tourism Film Festival, as a member of ITCO, became a respectable festival in the domain of international actions. Each year it attracts an increasing number of production companies from around the world that apply authors with tourist, travelogue-documentary, cultural and environmental films. In this year of the Great 20th Jubilee, it is expected a record number of applied films. This is confirmed by a respectable number from last year’s 19th ITF’CRO, from 265 received films from 57 countries from all the continents, for some of the international awards, national award „Baldo Čupić“ and Grand prix of the 19th ITF’CRO ‘2016, there have been 65 nominated films from 24 countries (60 foreign films and 5 Croatian films). The international jury awarded 19 authors/films/producers.

15th KEA-CRO / project that represents Croatian cities/places/centers that compete for the most prestigious international award CROATIA WITH LANDSCAPE FOR THE INTERNATIONAL GOLDEN FLOWER AWARD. Under the slogan „PEOPLE, PLANTS AND PRIDE…GROW TOGETHER.“ Competing on embellishment of their environment, urban of rural, they seek for solutions for the best ecological challenges and how to improve the quality of life. And not only in the landscape, horticulture and gardening, but also in the culture of life, tourism and environmental awareness. The development and spreading of education and awareness of large number of people about value, improvement, importance and sustainable development of green spaces, but also of natural environment in any society are fundamental objectives of this project. In the context of climate changes and environmental concerns, all the communities involved in this project can be proud of their efforts that leads to concrete solutions related to the environment and contributing to the improving of the entire society.

This, already traditional, internationally acclaimed multimedia project, with a notable reputation in the world, is a unique event of its kind in Croatia. Designed to actively contribute to the promotion of international integration process of modern tourism, in it’s recent years gained a reputation as a dynamic and important event. It takes place in a very suitable time of year, the start of active preparation for the upcoming tourist buisness year. In the realization of these events, connecting the world’s tourism, film festival, cultural, landscape associations, combining culture, tourism, film tourism, ecology, the positions of these three events are becoming stronger. This actively contributes to developing awareness for environmental protection, sustainable development, ecology and to quality of life. We are extremely happy that the number of the accredited participants is rising each year. Among them there are respected individuals and organizations – Laureates, authors and producers of tourism films, either they are Croatian or foreign travel journalists.
Through 3 working days (Wednesday, Thursday and Friday) with exhibitions, presentations of laureate-winners of international tourist awards, projections of tourism films, presentation of the exhibition, it is organized: International Symposium, “round table”, film, tourism, education and environmental workshops, special promotions, professional excursions and exploration of the historical, cultural and other attractions in the area. It is an opportunity to meet and realize numerous contacts, to talk about business, to exchange international experience and knowledge with the people who make the important decisions in the domain of international tourism, environmental protection, sustainable development, manufacturing and production of tourism films… With journalists covering the event, and world media partner – Travelindex, there is immeasurable contribution to the promotion of the tourism events in Solin or Split, their area, Dalmatia and Croatia altogether. This project significantly contributes to the overall development of cultural tourism in the world.

We are proud of the fact that we are recognized by the global and European landscape, film festival and tourism journalists associations; FEST, FIJET, ITCO, CiB. It is estimated that with this event, encouraging international integration process of contemporary tourism, through the connection of participants, together they can contribute to the development of tourism, tourism film, protection of the environment, to a better quality of life, and to the international tourist trade, and with that satisfying high-demanding requirements of tourism in all its segments. They significantly contribute to recognition of the local, regional and national tourism products. Their participants are becoming better in understanding of other people and countries and that is the fundamental goal of this event.

With welcome to all the participants of the event in Solin / Croatia 2017, in advance, our sincere congratulations to this year’s laureates and also on the entrance in the International club of Merited in developing of tourism.