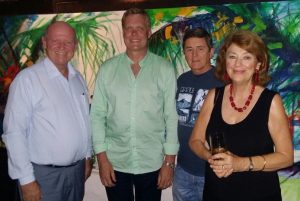 President Danny Faure, as head of the Executive Branch, said: “Connecting Parliament with the public; engaging citizens; remaining accountable, open and transparent; and keeping the institution relevant are critical issues to discuss in the 21st Century. All arms of Government – the Executive, the Judiciary and the Legislature…need to be mindful of these responsibilities if they are to uphold our democratic tradition”.

The unofficial fourth branch of Government, the Media, is a powerful broadcaster of information, which cannot be overlooked. Their reach is exacerbated in the digital age, with news snippets readily available at the touch of a button. The Media can be a facilitator of transparency, thwarting the culture of sweeping negative news under the carpet. However, they can also be used to spread discord and to push agendas if there are no checks and balances on their power, much like every other branch of Government.

This year, Seychelles will need to repay its debts and/or external loans that are now due. We may consequently expect our island Nation to dip into its reserves. These difficult times should see tourism as an industry, the pillar of the economy, assume an even greater role of importance.

The quote for this week is on challenges; President Nelson Mandela stated the following when he received the Freedom of the City of London award in July 1996:

“We do face major challenges, but none are as daunting as those we have already surmounted”

Encouraging Seychellois to invest in his or her own country must be the safest way forward. How to continue to do this is in itself a challenge and the country will need to relook at its “ease of doing business” records and correct the obstacles that continue to hamper its progress. Fairness in development should be guided by anti-monopoly laws to ensure everyone can be in competition if he or she so decides.

It is important to again today acknowledge all who are diligently re-posting the Saint Ange Tourism Report weekly. Our Report ranges far and wide, from Australia to the Americas, from the Indian Ocean Vanilla islands to Africa & Asian and Greater Europe, with your continued support, which is greatly appreciated. You are helping us to grow from strength to strength with each new Edition.