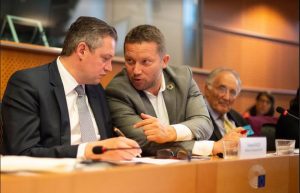 Brussels (Belgium ) – July 29, 2019 (travelindex.com) – At the European Parliament in Brussels this week, there was a Round Table discussion among MEPs and Tourism stakeholders on Climate Friendly Travel – towards Zero Carbon 2050. The event was led by Konrad Mizzi, Minister of Tourism of Malta, and chaired by Istvan Ujhelyi, Vice-Chair of the EU Transport & Tourism Committee (TRAN). Other speakers included Elena Kountoura MEP and former Tourism Minister of Greece, Malta MEP Josianne Cutajar, as well as Heads of several European Tourism Organizations.

Through Malta’s Sustainable Tourism vision, and its new global climate initiative. Minister Mizzi has recently brought SUNx – a climate focussed legacy program for the late Maurice Strong, father of Sustainable Development – to the island, to develop a global center of excellence in Climate Friendly Travel and deliver a long-term “Plan For Our Kids”. He opened the discussion to explain why this is a major opportunity for Europe to bring Tourism into the global mainstream of Climate Resilience, and how MEP’s can play a pivotal role.

Minister Mizzi said: “Climate change hurtled to the top of the political agenda, propelled by extreme weather, climate migrants, and determined young activists. The European States, EU Institutions and a cross-section of stakeholders have played a leading role in the global response in the Paris Agreement and the hardening UNFCCC 1.5o temperature increase, red line. The new EU budget will have 1 in every 4 Euro devoted to Climate resilience.

Travel & Tourism, as a leading European and worldwide economic, trade, employment and development sector is also an important part of the carbon reduction challenge – representing some 5% of total global emissions and predicted to increase significantly by 2050, due to inexorable growth and particularly the heavy reliance on fossil fuel-based energy.”

“SUNx Malta will deliver an action program for Climate Friendly Travel ~ measured: green: 2050 proof. It is is designed as a catalyst for low carbon Tourism as it engages in the mainstream Paris Agreement transformation to a New Climate Economy. It will do this by injecting an immediate push to increase the engagement of the sector in the 2050 carbon-neutral drive, with an annual carbon reduction, ambitions report, registry and think tank. This is a Europe based, global initiative, using model EU big data sources and delivery programs”

MEP Istvan Ujhelyi, who hosted the event said that ” this is an ideal time to launch a bold initiative to .boost the climate Resilience of the Travel & Tourism sector, which is so vital to the wellbeing of European citizens, and to encourage increased low carbon operations across the travel ecosystem. We in the European Parliament will continue to work closely with the Ministry of Tourism of Malta and SUNx to keep these issues on the political front burner”

Professor Geoffrey Lipman, SUNx Co-founder, thanked Minister Mizzi for his vision to base the SUNx global centre for Climate Friendly Travel in Malta saying “we are a legacy program for Maurice Strong – a believer in the power of the Travel & Tourism sector to be a catalyst for positive change, because of its widescale consumer and community impact”. He also underscored the critical role of the Parliament and Commission in encouraging the spread of increased ambition for climate Friendly solutions in the sector and thanked Istvan Ujhelyi for his foresight in identifying the importance of this issue for Europe. “We will work closely with the Minister and the European Parliament to increase the ambition for a low carbon sector going forward, by bringing a new climate focus and collaborative framework into play”

About Malta Tourism
The Ministry of Tourism of Malta (MOT) and the Malta Tourism Authority (MTA), were set up the strengthen the public and private partnership in tourism through greater and more direct participation by the private sector in national planning and development of the industry. MTA works to advance the economic and social activity of tourism in the national interest, by executing Ministry Policy with all stakeholders to develop a sustainable industry for current and future generations.

About SUNx
The Strong Universal Network SUNx is a program of the EU-based, not for profit Green Growth and Travel Institute, and a legacy to the late Maurice Strong – Sustainable Development Pioneer. Its goal is to promote Climate Friendly Travel with good & bad effects measured and managed coherently: with Green Growth at the core and, 2050-proof in line with the Paris Accords, and the W.E.F. 4th Industrial Revolution. It has its global base in Malta.