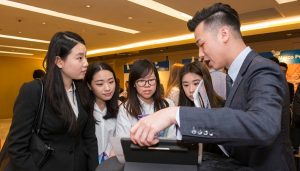 Hong Kong (Hong Kong SAR) – September 24, 2018 (travelindex.com) – Whether or not consumers believe they have control over events in their lives determines their likelihood of reusing hotel booking apps, find Professor Rob Law of the School of Hotel and Tourism Management (SHTM) at The Hong Kong Polytechnic University and co-authors in a recently published study. This belief is known as “locus of control” (LoC), the researchers explain, and consumers with an internal LoC are more likely to use hotel booking apps because they feel more positive about their ability to use technology and overcome any difficulties they may encounter. In contrast, consumers with an external LoC are likely to only use travel apps with user-friendly interfaces that also offer plenty of support when difficulties arise. Practitioners aiming to introduce or improve mobile booking apps will benefit from the useful recommendations the researchers offer for addressing the concerns of different user types.

Smartphones are increasingly popular, with more people now owning them than personal computers. The researchers note that this increase in smartphone use has prompted many hoteliers and online travel agents to develop mobile apps to facilitate easier reservations. By 2015, almost half of all travel bookings in China were made through mobile apps, as they are highly convenient and offer consumers a “pleasant booking experience”. China’s huge outbound tourism market offers great promise for the further development of tourism-related apps, and “global tourism practitioners are adjusting their strategies” to secure their share of this market.

Despite this market potential, however, the researchers note that little is known about “what drives consumers’ intention to continue using mobile apps for making hotel reservations”. They suggest that LoC may be useful in understanding individual differences in the intention to reuse mobile apps. The concept consists of three dimensions, the researchers explain: (a) internal control refers to belief that the outcomes of events are “determined by effort, ability and skill”, (b) control by powerful others refers to the belief that outcomes rely on “external agents that can make things happen”, and (c) chance control is the belief that outcomes are the result of “luck, fate and chance”.

While LoC is known to affect technology adoption, the cognitive mechanism by which it does so requires exploration. The researchers thus suggest that four cognitive factors are involved in the adoption of new technology. (a) The first factor, “performance expectancy” refers to the user’s perception of how mobile booking apps can improve the experience of making hotel reservations. (b) The second, “effort expectancy” refers to the perception of how difficult it will be to use the app. (c) The third, “social influence” is the extent to which the user is influenced by the opinions and behaviour of others. (d) The fourth factor, “facilitating conditions”, refers to whether users feel they “possess the necessary resources and support” to use the app to make a booking.

The researchers designed an online survey with the aim of determining the extent to which the four factors and LoC actually do influence the use of mobile apps for making hotel bookings, clarify “the cognitive mechanism that connects LoC and intention to reuse” and determine the perceived risk of using mobile booking apps. Targeting Chinese participants over the age of 18 who had previously used a mobile app to make a hotel reservation, the survey measured app performance expectancy, social influence, reuse intention, perceived risk, app effort expectancy, facilitating conditions and LoC.

Usable responses were collected from 466 participants over a 4-day period. The participants were evenly split between males and females, and they were generally quite young, with almost half aged 18-29 and a further 40% aged 30-39.

As the researchers point out, “user experience is central to the success of technology products and services”. Clearly, mobile apps for making hotel reservations must be pleasant and easy to use for consumers to use them regularly. Accordingly, the findings indicated that performance expectancy and, to a lesser extent, effort expectancy influenced the intention to reuse. In other words, participants who found mobile apps to be useful and superior to other booking methods and found them easy to use were most likely to use them in future. Facilitating conditions were also a significant factor, and the researchers note that users “tend to be highly demanding of supporting services”, particularly in the early stages of technology adoption.

These results suggest that app developers need to provide user-friendly interfaces and the booking process should be similar to that on the website to “reduce the effort and time required of users”. As support services are also highly important, online consultation functions should be available to minimise the constraints encountered by users, and providing a “frequently asked questions” section is also important for supporting users through the booking process.

Social influence also played a part, as participants who had friends who used booking apps and who encouraged them to do so too were more likely to use apps for future bookings. However, word of mouth did not seem to be as influential as ease of use and support services. Perhaps surprisingly, although perceived risk had a negative effect on intention to use, it was weaker than the effects of the other cognitive factors. Nevertheless, the researchers caution that the effect is “not negligible” and app developers “are obliged to optimize system security” to reassure users and reduce their risk.

Next, the researchers examined how participants’ LoC, in combination with the above cognitive factors, influenced their intention to reuse mobile apps. Participants with an internal LoC, believing they were in control of events, perceived mobile apps as easy to use and felt more able to overcome any difficulties. They were thus highly likely to use them for future bookings.

However, participants who perceived events to be controlled more by chance were less likely to use mobile apps in the future. The researchers explain that these participants tended to focus on the negatives: they perceived apps as difficult to use and were more concerned about the risks. People with a chance LoC tend to be female, young and with a low level of education, so it is important for app developers to survey these groups to find out which aspects of app use they find most difficult and thus “minimise the adverse effects of effort expectancy”.

Those who believed in “control by powerful others” were only likely to reuse booking apps if they felt that plenty of support services were available to help them complete their bookings. For these users, the researchers suggest, it would be particularly helpful to provide online instant consultations, perhaps through “popular peer-to-peer platforms in China, such as WeChat”, because they believe that outcomes depend more on other people than on themselves.

The study has shown that understanding consumers’ LoC can be helpful for developing targeted marketing strategies. This is a novel area of study in tourism research, despite LoC being a consistent predictor of attitudes, emotions and behaviour in other fields. Given that both dispositional and cognitive factors are known to strongly influence the adoption of technology, the study provides important information for tourism practitioners to understand how they can harness this knowledge to encourage consumers to use their mobile apps.

Book your hotel in Hong Kong and around the world in 55 countries at best rates available. Pay at the hotel. Book now at HotelWorlds.com!