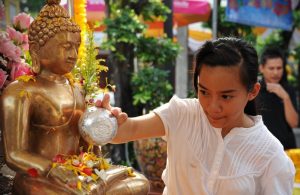 Bangkok (Thailand) – April 8, 2017 (travelindex.com) – Celebration is part of Thai culture. Thai people celebrate in many occasions all year round, from Songkran – the Thai New Year to Loy Kratong – the festival of lights, and each festival has its own reason and character like no one else. These festivals let visitors experience Thailand differently through numerous festive celebrations throughout the 12-month calendar.

Thailand invites visitors and travelers to take part in unforgettable moments and experience the beauty of Thailand festivals (www.thaifest.org) throughout the year.

31 March-1 April
Similar Music Festival
Where: Songkhla
Chill out by relaxing songs on the beach performed by famous singers such as ben chalatit Nuvo  The Palace & pu anchalee The Parkinson Mild and more.

7 April 2017
Hat Siao Elephant Ordination Ceremony
Where : Wat Hat Siao. Hat Siao, Si Satchanalai, Sukhothai
See the procession of ordination ceremony on the back of beautifully decorated elephants, on which persons who are about to be the ordained as Buddhist monks will wear black sunglasses and dress up exquisitely in colorful Thai Phuan clothes.

12 – 15 April 2017
Chiang Mai Songkarn Festival
Where: Chiang Mai municipality
Join in the food offering and the merit making, watch the parade of Miss Beauty Contest riding on bicycles in traditional costume while holding local umbrellas, The Contest of Lanna 5 Offerings, the activity to “carry on the tradition and retrace Chiang Mai New Year”, paying homage to the Buddha’s relics, pouring water to Phra Sirimangkhalacharn and the tradition of building sand pagoda.

16  – 17 April 2017
Wan Lai Songkran Festival
Where: Bodhi Court, Na Kluea, Wat Chaimongkhon, Chon Buri
There are various activities in the festival such as sprinkle water on the elders, the parade, and enjoy splashing water among both locals and travelers.

Thailand invites visitors and travelers to take part in unforgettable moments and experience the beauty of Thailand festivals (www.thaifest.org) throughout the year