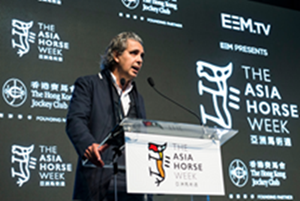 Hong Kong – February 12, 2018 (travelindex.com) – February 7th, 2018 The inaugural Asia Horse Week conference came right out of the gate and hit the ground running, with the first day’s events attended by nearly 200 hundred equestrian experts. As a unique rendezvous formed to promote the exchange of equestrian knowledge, numerous notable dignitaries from all corners of the international equine community were in attendance at the AsiaWorld-Expo in Hong Kong.

Held alongside the 6th edition of the Longines Masters of Hong Kong, the summit is the first of its kind in the region and is set to become an unmissable annual event on the equestrian calendar.

Established through the strong support of the Founding Partner, the Hong Kong Jockey Club, the Asia Horse Week will promote the booming growth of the equestrian sport across the region. More than 60 key equestrian delegates will be present over the next few days and there are over 25 countries represented through 18 equestrian federations and riders.

Some of the enlightening topics discussed on the first day included France’s equestrian connection to China, a revealing discussion delving into British and German equine secrets, and the current status of the horse-riding industry in China. Many big names from the equestrian media were present and the event was broadcast and translated live on social media and EEM TV.

Five leading luminaries kicked off the proceedings during the official opening session. The CEO of EEM & Founder of the Asia Horse Week, Mr. Christophe Ameeuw, commenced the morning by pointing out that Hong Kong’s role as host for the 2008 Summer Olympics equestrian events paved the way for the Asia Horse Week. “Strategically, Hong Kong is the best place to hold an event such as this, and with the Hong Kong Jockey Club as our fantastic Founding Partner, we will be able to connect the Asia region to the rest of the world,” Mr. Christophe Ameeuw commented.

The Chairman of the Asia Horse Week, Mr. Raphael Le Masne de Chermont, said there could be no backdrop more suitable than Hong Kong for such an event, being one of the most active racing cities in the world with a long equine legacy. “The Asia Horse Week will be a one-stop international platform. It will be a place to learn, entertain and exchange about equestrian matters,” he said.

Dr. Simon Ip, the Chairman of The Hong Kong Jockey Club, also echoed the same sentiment, calling the Asia Horse Week, “an ideal forum for sharing knowledge.” He said he is confident it will become the start of a regular and ongoing equestrian dialogue across the world.

After these key figures from the equestrian industry cut the ribbon in the morning the day got rolling. The second session included experts from the British Horse Society and the German Equestrian Federation, who shared their experiences with their equestrian systems and how features of these could be implemented in Asian clubs.

The last two sessions of the day focused more on the development of China, with the third session of the day bringing together three renowned speakers who bridge the gap between France and China. They discussed how to successfully promote French equestrianism in China and about how the Fédération Française d’Equitation (FEI) is starting relationships with many countries around the world.

The last session of the day featured four important characters in the China equestrian industry talking about what the future holds for the country, with a particular emphasis placed on how the sport would fit into China’s Belt and Road Initiative.

The Secretary-General of the China Horse Industry Association, Mr. Gaofeng Yue, opened the final session by congratulating the founders of the Asia Horse Week. He extended his thanks to the organisers, as they were helping to connect and engage new audiences, and he pointed out the significance of the Asia Horse Week logo. He said it symbolically reflects how important horsemanship is to China.

Mr. Chen Che, the Secretary-General of the Beijing turf equestrian association, was another key speaker from China, and he presented figures about the rapidly growing Chinese equestrian market and key issues to address in the industry. A Chinese professional rider, Alex Hua Tian was a late addition to the roster, but his talk was no less engaging. He introduced his charity, Horsemanship, which is about changing perceptions and connecting communities with equestrianism.

As the day wrapped up with a cocktail and breathtakingly unique equestrian performance, those in attendance reflected on the knowledge that had been shared. A key theme that many agreed on was that the Asia Horse Week addressed the urgent need for such an event in Asia. Mr. Christophe Ameeuw, the CEO of EEM & Founder of the Asia Horse Week, summed up the first day of the conference when he called it “the beginning of a long story.” He said the time is right for such an event and he hopes it will be around to connect people around the world for many years to come.

About EEM
With a passion for equestrian sports, Christophe Ameeuw – Founder and CEO of EEM – created the Ecuries d’Ecaussinnes in 1997. Based in Belgium, the stables today enjoy an international reputation for the trade of sport horses, high-end breeding, and an academy giving access to the best in equestrian training. The organization, as well as the reinvention of show jumping competitions is the challenge that Christophe Ameeuw and his team have set for themselves. EEM headquarters are located in the heart of Ecaussinnes Stables, where the team continues its quest to develop equestrian sports further. Inspired by the Grand Slam of tennis, EEM brings together under one roof the best of show jumping, entertainment and lifestyle experience. After the successes of the Audi Masters in Brussels, and the Gucci Masters in Paris, EEM has set out to conquer new continents and has since developed the Longines Masters Series internationally.

This “Grand Slam of Indoor Show Jumping” spanning over three continents in Paris, Hong Kong and New York, is one of the most prestigious equestrian events in the world.

In 2017, EEM created a new iconic competition, the Riders Masters Cup. Offered to the public alongside the EEF (European Equestrian Federation) and alternating between Europe and the United States, this battle will pit the world’s two leading powers in show jumping against one another: Europe and the United States. On the Asian continent, “Asia Horse Week”, rallying point for the international sporting community there, also serves as a prime setting for the Longines Masters of Hong Kong, illustrating EEM’s determination to develop the sport’s international arms in the Asia-Pacific Region. For more information, visit www.eemworld.com

The Hong Kong Jockey Club
Founded in 1884, The Hong Kong Jockey Club is a world-class racing club that acts continuously for the betterment of our society. The Club has a unique integrated business model, comprising racing and racecourse entertainment, a membership club, responsible sports wagering and lottery, and charities and community contribution. Through this model, the Club generates economic and social value for the community and supports the Government in combatting illegal gambling. In 2016/17, the Club’s total direct return to the community was HK$30.5 billion. It is Hong Kong’s largest single taxpayer, one of the city’s major employers and one of the world’s top ten charity donors. The Club is always “riding high together for a better future” with the people of Hong Kong. Please visit www.hkjc.com.